Laura Kaye is joining us today to share the cover reveal and re-release of her series, Vampire Warrior Kings! Check it out and be sure to order your copy today!

A Note From Laura Kaye:

I am so thrilled to re-release my Vampire Warrior Kings books with all new gorgeous covers and new content in each book, including brand new epilogues in books two and three. Vampires were my first love as a reader and a writer, so it was a thrill to get to immerse myself in this world again. I hope you’ll give the Vampire Warrior Kings a try!

Title: In the Service of the King

Kael McQuillan, Warrior King of the Vampires, loathes the Night of the Proffering. He needs the blood of either his mate or a human virgin to maintain his strength, but hasn’t enjoyed the ritual since he lost his wife centuries ago. Kael doesn’t want a new companion, yet his resolve is tested when he meets his newest offering. She’s beautiful and poised, but her curious, mismatched eyes intrigue him more than they should, and when he hurts her, he can’t help wanting another chance…

Shayla McKinnon knows the rules: Serve the needs of the Vampire Warrior King. Obey his commands. Don’t ask questions. But knowing the rules doesn’t always mean that Shayla follows them. She’s waited her whole life for this moment, for a chance to become part of another world—for the possibility of getting justice for those she’s lost. And Kael is her darkest fantasy come to life, even though he’s intimidating as hell, too.

Now they’re locked in a red-hot battle of wills, and the only question is which one will end up on their knees… 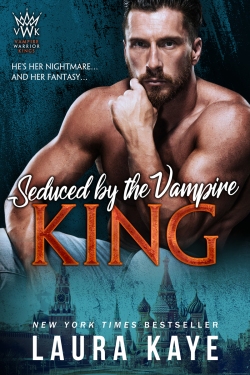 Title: Seduced by the Vampire King

American exchange student Kate Bordessa has fled to Russia to escape her family’s hopes that she’ll become one of the Proffered—human women who feed and mate with elite vampire warriors, cementing an eons-old alliance. The very idea terrifies her, but when she stumbles upon a wounded vampire in the streets of Moscow, she’s instinctively driven to protect him—and feels an undeniable spark of desire.

Grieving over the deaths of his brothers, Vampire Warrior King Nikolai Vasilyev throws himself into battling his ancient enemies, focused only on guilt and vengeance—until the attack that brings him to beautiful, fearless Katya. She gives him a second chance that makes Nikolai want something more for the first time in so long…

When their sexual attraction explodes into one night of uncontrolled passion, fate marks them as mates. But is their connection strong enough to convince them to embrace a destiny neither of them wanted? Title: Taken by the Vampire King

Henrik Magnusson is supposed to be immortal, but a mysterious ailment leaves the Vampire Warrior King near death, and not even the blood of the Proffered—human virgins trained to feed and mate with the elite warriors—sustains him. Then he rescues a beautiful young woman from the Soul Eaters, his ancient enemies, and she sets off a bloodlust and a desire he hasn’t felt for centuries.

Photographer Kaira Sorenson’s life takes a nightmare turn when she’s saved by a…vampire. But she’s seen too much, and now she’s his prisoner. All of which means she should be afraid of Henrik, but he’s regal, tormented, and hot as hell, and she can’t deny her intense attraction to him. And then she learns that her blood may be his only salvation…

Kaira knows what it’s like to be sick, so she agrees to help Henrik. But when feeding turns into a scorching night of so much more, she must decide if she’s willing to be his forever—but will the king release her so she can freely choose?

The king’s hands threaded under her arms and, with little effort, pulled her to her feet. And then he pressed his mouth to Shayla’s.

Her mind erupted into a cacophony of joyous confusion. She’d been specifically told there would be no kissing. The king did not kiss.

But, holy hell! Did the king ever kiss.

His large frame bent down over her, surrounding her in his heat. His full lips sucked and pulled at hers and his tongue demanded entrance and exploration, which she freely granted. His hard muscles bunched and thrummed around her, setting her body on fire everywhere they touched. The scent of powerful masculinity filled her nose, and the exquisite flavor of his tongue in her mouth intoxicated her. And, oh God, every time she felt the passing hardness of his fangs as they kissed made her whimper and moan. Her body readied itself immediately for his, moistening, opening.

Having shielded herself from physical relationships, she was astounded to learn her body had the ability to produce this crazy, urgent euphoria. Her brain scrambled to process each new, maddening sensation. In that moment, she would’ve done anything to maintain the feeling.

Kael growled low in his chest as his mouth came at her again and again, and Shayla felt the vibration of the feral sound against her breasts. She squeezed her thighs together, seeking friction to satisfy even a little of her now uncontrollable lust. Her mouth was so filled with his probing tongue it was difficult to get enough oxygen, but his kisses convinced her she could live without it as long as he continued to devour her so intensely.

Never had she imagined the expression of physical love could make her feel so wanted, so needed.

His obvious pleasure throbbed against her stomach and flooded her with unbelievable feelings of power, and just a little fear. Because they were off the grid now, outside the bounds of the rules and expectations she’d been taught during her training. And she was thrilled it might mean he was as affected by her as she was by him. Wherever the king was leading them, she was only too happy to follow. In truth, she felt powerless to do otherwise.

A sharp, piercing sensation nicked the edge of her tongue. Kael groaned and she gasped into his mouth. He bit me! They said he wouldn’t—

All thinking abruptly halted as he sucked on her tongue and fed. She could feel the pulling flow of her blood. It was an electric rush that set her body on fire.

From just their first kiss… 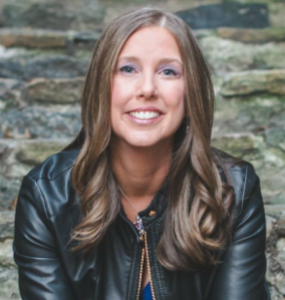