A Conversation with Catherine Lanigan, Author of WEB OF DECEIT

Published by beckymmoe on September 16, 2016 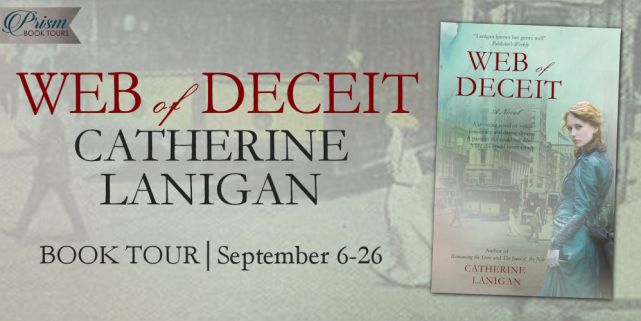 What 5 things should readers know about you?

LOL to #4—though isn’t that why everyone gets a tablet?

Where did the inspiration for this book come from?

This is one of those stories that came from the character. Amanda showed up in dreams as a young girl of about 10. Then later as a woman, the toast of New York society and then later, as the first voice of women’s rights.

How long have you been writing, and what (or who) inspired you to start?

I have been writing for 37 years. Though I’ve told this story before, there are always new readers and bloggers, who might have missed it.

I was about six when it really formulated in my mind. When I was young my mother was ill…a lot. My father didn’t believe in television, so to entertain my younger brothers and sister, I created fairy tales and stories I told them. I didn’t write anything down until I was in high school. My teachers thought I had talent.

Actually, I wanted to be a journalist. A foreign correspondent. I dreamed of being like Brenda Starr from the Sunday Chicago Tribune newspaper.  When I went to college, my second semester of my freshman year, the head of the English Department recommended me for a special creative writing class by a “travelling professor” who had taught at Princeton and Yale.

After a month, I’d written a short story. The night before class when the class (all senior women) would critique my story, the professor called me into his office. I just knew he was going to praise my work. Instead, he said, “Frankly, Miss Lanigan, your writing stinks. I have no idea how you weaseled your way into my class. You have no concept of structure, characterization or dialogue. I will give you that your description is nice.”  By this time I was in tears. I’d announced to the entire college that I expected to graduate Summa Cum Laude. (Big mistake.)  He told me that he’d caught me at the crossroads of my life. That my parents were spending a lot of money on my education, but I would never earn a dime as a writer.

He went on further to say that he was mindful of my desire to graduate Summa. To that end, he promised to be my “crutches” to get through his class and he would give me a B on one condition. That I promise never to write again.

I said, “It’s a deal.”  That night I burned my manuscript and promised God I would never believe in dreams again. If I could not chew it, taste it, spit it out, it wasn’t real and it wasn’t for me.

I didn’t write for 14 years until I met a research journalist who encouraged me to write. I sat down and wrote 400 pages of a WWI romantic spy novel.  I sent the unfinished manuscript to him. A month later he called me and said he thought it was “damn good and I’ve sent it to my agent. She’s going to call you in half an hour.”

Thirty minutes later a woman from New York called me and asked me questions about whether I wanted to go trade, soft or hard. I had no idea what she was talking about. She told me she would send a contract for me to sign with her agency. She asked if I had any questions.  I said, “Only one. Does this mean you like the book?”

What are you working on right now? What can readers look for from you in the next year?

Right now, I’m finishing up the edits on DANGER ZONE, my #7 in my SHORES OF INDIAN LAKE SERIES. This is the story of Cate Sullivan, real estate agent, who has been living in Indian Lake for 6 years in disguise. She’s been running from her abusive husband, who is now a drug lord in Chicago.   I’m over half way through the writing of WEDDING FOR ISABELLE.  By November, I should be writing A BRIDE FOR MICA.   Then….onto the next dozen HEARTWARMING books!

What are you reading right now, and what are your thoughts about it so far?

I’m reading Along the Infinite Sea by Beatriz Williams. I adore it. I’ve read ALL her books and can’t get enough. Next up, is Carousel Nights by Amie Dehnam for Heartwarming.

Oooh, they both sound good 🙂

If you had to “sell” your book in a single Tweet, what would you say?

Fabulous! Thank you so much, Catherine!

Catherine Lanigan is the international bestselling and award-winning author of forty published titles in both fiction and non-fiction, including the novelizations of Romancing the Stone and The Jewel of the Nile, as well as over half a dozen anthologies, including “Chicken Soup for the Soul: Living your Dream”, “Chicken Soup for the Writer’s Soul”, and more. Ms. Lanigan’s novels have been translated into dozens of languages including German, French, Italian, Spanish, Russian, Portuguese, Chinese, and Japanese. Ms. Lanigan’s novels are also available in E-books on Amazon.com and Barnes and Noble.com, Apple Store, Mobi and Kobo. Several of her titles have been chosen for The Literary Guild and Doubleday Book Clubs. Her Vietnam war-based novel, The Christmas Star, won the Gold Medal Award Top Pick from Romantic Times Magazine and has also won Book of the Year Romance Gold Award from ForeWord Magazine as well as Book of the Year Romance from Reader’s Preference.

Lanigan is the author of a trilogy of non- fiction books regarding angelic intervention in human life: Angel Watch, Divine Nudges and Angel Tales published by HCI and Cedar Fort.

Lanigan was tasked by the NotMYkid Foundation to write a non-fiction book addressing teen addictions. Ms. Lanigan’s first Young Adult adventure novel, The Adventures of Lillie and Zane: The Golden Flute, was published by Cedar Fort.

Currently, she has published six novels in the Shores of Indian Lake series for Harlequin Heartwarming: Love Shadows, Heart’s Desire, A Fine Year for Love, Katia’s Promise and Fear of Falling. Sophie’s Path pubs July, 2016. She has recently contracted for three more in the series: Danger Zone, Wedding for Isabelle and A Bride for Mica.

As a cancer survivor, Ms. Lanigan is a frequent speaker at literary functions and book conventions as well as inspiring audiences with her real stories of angelic intervention from her Angel Tales series of books. She is an outspoken advocate for domestic violence and abuse and was honored by The National Domestic Violence Hotline in Washington, D.C. (THE EVOLVING WOMAN). She has been a guest on numerous radio programs including “Coast to Coast” and on television interview and talk show programs as well as blogs, podcasts and online radio interview programs.

From the depths of a London slum, Amanda Granger created an illusion of wealth and breeding that became her passport into New York society. With her dazzling beauty and the ease with which she lived her lie, Amanda captivated an adoring public and drove men to bold and dangerous passions.

But for all her fierce ambition, all her daring dreams, Amanda Granger knew that her heart’s desires were held together by the fragile threads of deception and secrets. Triumph would always be elusive until she escaped from her web of deceit.