Published by beckymmoe on November 5, 2017

On Tour with Prism Book Tours

We hope you enjoyed the tour! If you missed any of the stops
you can see snippets, as well as the link to each full post, below:

Launch – Note about the Book and Series

Welcome back to the Cape with the newest release in the Sweet with Heat: Seaside Summers series, SECRETS AT SEASIDE, an emotional and heart-warming friends-to-lovers romance! SECRETS AT SEASIDE features all of your favorite fun, flirty and flawed Seaside characters, as well as a second-chance love story between two fan favorites, Amy Maples and Tony Black. The road to their happily ever after is a deeply emotional one, and watching these two characters get a second chance at love is sweet and satisfying!

“I JUST CAN’T believe that Jamie’s the first one to get married. I mean, Jamie? He never even wanted to get married.” Amy Maples was three sheets to the wind, sitting in a bar at the Ryder Resort in Boston. That was okay, she rationalized, because it was the night before the wedding of her good friends Jessica Ayers and Jamie Reed, and she and her friends were celebrating. Besides, now that Jessica and Jamie were getting married and her other three besties had gotten engaged, Amy was the only single woman of the group. Drunk was the only way she was going to make it through the weekend.

“For some reason what I wasn’t expecting was it to be a tear-jerker. Now, I am not one to cry or get choked up but I know a lot of big readers, just within my family and if they were to read this, they would get choked up. So be forewarned, this read can get a bit emotional but, not in a bad way. It added a layer of sensitivity and heart. . . . A story mixed with smiles, uncertainty, curiosity, and a little bit of truth and sadness all mixed in a good story.”

She was always the good girl who did the right thing, the only exception being the occasional extra drink or two when she was with her Seaside friends. At least that’s what she led everyone to believe. Only she and Tony knew that wasn’t the only exception—and she made sure that was a taboo subject between them. He wouldn’t dare bring it up. She might not survive if he did. She sobered a little with the memory and shifted it back into the it-never-happened place she buried deep inside her. Her secret was lonely in that hollow place, being the only one kept under lock and key.

Amy couldn’t stop the exasperated sound that left her lips. “You read my texts?” That was the only way she could have known that Tony always offered to be there if she needed him.

“Duh. Of course I did. Consider it a recon mission. I had to know what we were dealing with here from his side.” Bella had been pulling for Amy and Tony to get together as long as Amy had been in love with him, which was just about forever. She stood and dragged Amy toward the dance floor. “Come on, sweetie. Time to have some fun.”

“This book is emotional, fun and satisfying. Just because the beginning got on my nerves I really did like it and recommend it. I just need to read Bella’s book. I loved that girl. No filter. HA HA! I also like how all the guys were there for Tony, too. This group is just too much for me but in a good way.”

It’s All About the Romance – Excerpt

Amy tucked her straight blond hair behind her ears and moved her shoulders to the slow beat of the music. “I’m not sure being here for the summer is smart anyway. It’s like torturing myself.” She stopped dancing at the thought of not coming back to Seaside for the summers. Could she really do that? Would she even want to? Could she survive not seeing Tony even if she knew for sure he didn’t want her?

“I am loving the Sweet with Heat: Seaside Summers series of books! I was excited to get the opportunity to read an ARC because I couldn’t wait to see what happens next in Cape Cod and this book did not disappoint! . . . A heartwarming read to enjoy over a long weekend!”

Thoughts of a Blonde – Excerpt

Amy wanted to believe them and to see what they apparently saw when he looked at her, but she never had. It was the secret memories of being in Tony’s strong arms that long-ago summer, feeling his heart beat against hers, feeling safe and loved, that made her hopeful there would come a day when they’d find themselves there again. But then her mind would travel to the end of those recent nights when she’d had too much to drink and he’d carried her home. When he’d tucked her into bed and gone along his merry way back to his own cottage across the road, quickly dousing her hope for more with cold reality. Whatever they’d had that summer, she’d ruined.

And don’t forget to enter the giveaway below, if you haven’t already…

Sweet with Heat: Seaside Summers features a group of fun, flirty, and emotional friends who gather each summer at their Cape Cod cottages. They’re sassy, flawed, and so easy to relate to, you’ll be begging to enter their circle of friends!

Secrets at Seaside by Addison Cole is the sweet edition of New York Times bestselling author Melissa Foster’s steamy romance novel Seaside Secrets. The stories and characters remain the same and convey all of the passion you expect between two people in love, without any explicit scenes or harsh language.

In SECRETS at SEASIDE…

Tony Black is the hottest surfer on the planet. He travels the world throughout the year and spends his summers on Cape Cod with his friends, at the Seaside cottages in Wellfleet, Massachusetts. He’s got his choice of women, but Amy Maples is the one he wants. Fourteen years ago she was his for an entire summer, until a devastating accident changed everything, and what they had seemed like it had never existed—at least for her.

Amy Maples is as consistent as the day is long. She’s spent summers on Cape Cod forever, she always does the right thing, and she’s spent years trying to reclaim the heart of Tony Black, the only man she’s ever loved. She’s back for a summer of fun with her friends at Seaside, only this year she’s been offered the opportunity of a lifetime thousands of miles away, and she’s decided to try one last time to reconnect with Tony. But having a relationship with Tony means dealing with her past—and dealing with her past may knock her to her knees.

Praise for the Series:

“Loved every sweet word of this story. Loved how the relationship developed between Leanna and Kurt in such a genuine way, it made me so invested in their happily ever after. An absolute treat to read and cannot wait for more from Addison Cole.” — New York Times bestselling author Sawyer Bennett (aka Juliette Poe, on “Read, Write, Love at Seaside”)

Other Books in the Series: 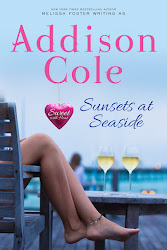 Addison Cole is the sweet alter ego of New York Times and USA Today bestselling and award-winning author Melissa Foster. She writes humorous and emotional sweet contemporary romance. Her books do not include explicit sex scenes or harsh language. Addison spends her summers on Cape Cod, where she dreams up wonderful love stories in her house overlooking Cape Cod Bay.

Addison enjoys discussing her books with book clubs and reader groups and welcomes an invitation to your event.

SIGN UP for ADDISON’S Sweet with Heat newsletter. Fun, flirty romance with a dash of heat.