New Release and Giveaway! KISS ME IN CHRISTMAS by Debbie Mason (Christmas, Colorado #6)

It’s always been you…

Actress Chloe O’Connor has become America’s sweetheart, but back in little Christmas, Colorado, she’s still remembered as a shy, awkward schoolgirl. And there’s no one she dreads (and secretly wants) to see more than her high school crush, Easton McBride. Just one look from the former star quarterback and it’s like she’s instantly transformed from daytime drama queen to tongue-tied teenager. She’s kissed Hollywood actors and famous cover models, so she can certainly play it cool while turning up the heat, right?

After an injury ended his military career, Easton McBride built a good life in the rugged countryside of his hometown. And the last thing he needs is his quiet solitude shattered by a high-maintenance temptress who isn’t anything like the sweet Chloe he misses. While he enjoys the flirtation with this new bold and beautiful woman, he can’t help but wonder whether a kiss could have the power to bring back the small-town girl he’s grown to love. 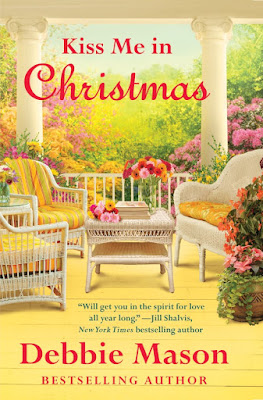 “Yeah, I can see that. Just wondering if it’s the guys buzzing around your girl like she’s a honey pot or your pink house setting you off,” Chance said.

“She’s not my . . . What do they think they’re doing? Do you see that?  They stole those flowers they’re giving her from my window boxes.”

He didn’t wait for his brother’s response. Though he doubted Chance could make one since he was laughing again. Easton strode in Chloe’s direction, the gravel kicking up dust under his boots.

One of the four men hanging around her chair looked up and said something to her. She leaned forward with a wide, welcoming smile. “Surprise!”

Now how was he supposed to stay mad at her when she was looking at him with excited anticipation on her gorgeous face?  Easy, he told himself, she’d painted his house pink and threw out his furniture and appliances without consulting him. And she’d spent what must have been a crapload of money remodeling a place he planned to tear down. All because he’d lied to her. And if he told her the truth now, she’d be humiliated and hurt.

She looked away and said something to the men. They walked off, but not before a couple of them shot him warning glances. Chloe unhooked her umbrella from the back of the chair and stood up, smoothing a hand down her body-hugging dress. As she walked toward him, she searched his face with a nervous look on hers. “You’re mad at me. You hate it, don’t you?”

He shoved his hands in the front pockets of his jeans. “No, just a little surprised.” He glanced at the cabin. “It’s kind of . . .  girly.”

“But you said you liked pink.” She looked up at him through her long lashes, and her shoulders sagged. “You were being sarcastic. Cat says I’m not very good at picking up on sarcasm.” She caught her bottom lip between her teeth and glanced over her shoulder. “I guess I could ask them to repaint it.”

“Jesus, no, don’t do that. I’ll get used to it.” He only had to live with it for another couple of months.

A look of relief spread across her face. “They’ve all worked so hard today, I’d hate to ask them to stay longer.”

“You wanna tell me why you’re talking with a Southern accent?”

Her cheeks pinked. “I pick up accents easily. The foreman’s originally from Savannah.”

So that explained the British accent. She spent too much time with Dame Alexander.

“Chloe, honey,” his brother said, coming up beside him. “You completely transformed the place.”

“You like it?” she asked with a hopeful smile.

“Are you kidding me? It’s amazing. Suits my brother to a tee. He secretly loves pink, you know.”

Easton shot his brother a look. If Chloe was a color, she’d be pink.

Debbie Mason is the USA Today bestselling author of the Christmas, Colorado series. Her books have been praised for their “likable characters, clever dialogue and juicy plots” (RT Book Reviews). She also writes historical paranormals as Debbie Mazzuca. Her MacLeod series has received several nominations for best paranormal as well as a Holt Medallion Award of Merit. When she isn’t writing or reading, Debbie enjoys spending time with her very own real-life hero, their four wonderful children, an adorable grandbaby, and a yappy Yorkie named Bella.
Website | Facebook | Twitter | Goodreads