Published by beckymmoe on September 29, 2016 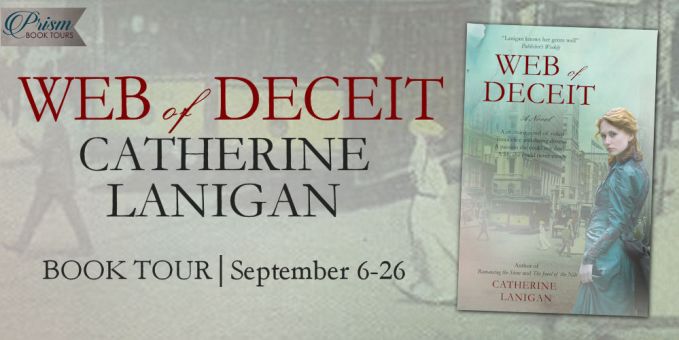 We hope you enjoyed this tour as we got to know more about Amanda’s story! If you missed any of the stops, go back and check them out now and don’t forget to enter the awesome giveaway…

Welcome to my world of historical fiction on ebook. WEB OF DECEIT is a step into the refined world of 1890 London and New York Society where deceit, treachery, murder and above all incalculable ambition reside.

Lady Kent would be furious; recently, a perpetual state of being for her employer, Amanda thought.

Amanda had no time for remorse or guilt for her tardiness.

“Amanda, I don’t think it wise to make decisions without your employer’s permission.”

“Tonight is the Queen’s birthday ball. There will be two hundred and fifty debutantes coming out this year. Eloise must look her best. This blue will make her eyes more lively.”

underneath the covers – Favorite Historical Books

In some ways, Web of Deceit, is my ode to Maugham. For the plot of getting Amanda out of London and to New York, I needed Harriet to provide her daughter with money. Harriet is a beautiful woman. Though by the time she is nearing 40 in 1889, she feels her life is over.

Casablanca. This is one of my favorite movies bar none. It’s always number one for me. It was my inspiration for my book SINS OF OMISSION, which I set prior to WWII and through WWII in Paris.

Georgia whirled around, hands on hips, lips pursed tightly. One look at Amanda’s smiling face and her anger melted.

“Go on with you. Miss Eloise didn’t sleep at all last night. She’s been ringing since dawn.”

The Silver Dagger Scriptorium – In Remembrance

When I set the dates for this tour, I wanted it to be in September as a remembrance of my husband, Jed Nolan, a film producer and director. His birthday was in September and I can’t begin the month without thinking of him.

“What are you talking about?” Amanda asked as she opened the thick lace draperies and let the morning sun wash the room in a pink-gold glow. “You should be happy. It’s your debut, all your friends will be there, you’ll get to wear your beautiful new gown. What could be better?”

If you were to sum up the story in a sentence, what would it be?

Where did the inspiration for this book come from?

This is one of those stories that came from the character. Amanda showed up in dreams as a young girl of about 10. Then later as a woman, the toast of New York society and then later, as the first voice of women’s rights.

“This is a debutante ball, Amanda. I know you have no knowledge of these things, being from the . . . with your background. But all the girls must wear white. Only pale pink bordering on white is acceptable. And these gloves. They are vulgar and crass.”

On this book tour, most of my posts and information have been about the fact that Amanda Granger came from the London slums and rose in New York society by telling a lie. In 1890 New York, though there were no “classes” as there were in England, there were still levels of society. Money bought a person a measure of a position. Political power was another. Fame still another.

Thoughts of a Blonde – Excerpt

Five years later, Amanda was making over ten shillings a week, two shillings more than the neighborhood girls, who worked at the garment factories or as telephone operators. Hers was not a difficult job. She was responsible for both the care and the acquisition of wardrobes for both girls, their personal care, their social schedules, and their studies. Eloise was just as disciplined as Amanda. Emily, however, was lazy and always looked for the easiest courses. But Emily was fun and full of pranks, and when her mischief wasn’t getting her into trouble, it was difficult for Amanda not to like Emily.

Disgusted with Amanda’s lack of awe, Eloise checked herself in the mirror. As she had earlier that day, she raised her hand and played with the tendril of hair that hung from her temple. The pink gloves did not have the impact of the blue ones. Eloise could almost hate the rules. Almost.

Sylv all about books and films – Excerpt

In a rush of fondness for a lifetime of shared moments, Eloise embraced Amanda in the way she had last year—before things, and she, began to change.

Eloise ceremoniously walked down the stairs with Amanda trailing her. At the foot of the stairs waited, a bit nervously, breathlessly, the entire Kent family.

From the depths of a London slum, Amanda Granger created an illusion of wealth and breeding that became her passport into New York society. With her dazzling beauty and the ease with which she lived her lie, Amanda captivated an adoring public and drove men to bold and dangerous passions.

But for all her fierce ambition, all her daring dreams, Amanda Granger knew that her heart’s desires were held together by the fragile threads of deception and secrets. Triumph would always be elusive until she escaped from her web of deceit.

Catherine Lanigan is the international bestselling and award-winning author of forty published titles in both fiction and non-fiction, including the novelizations of Romancing the Stone and The Jewel of the Nile, as well as over half a dozen anthologies, including “Chicken Soup for the Soul: Living your Dream”, “Chicken Soup for the Writer’s Soul”, and more. Ms. Lanigan’s novels have been translated into dozens of languages including German, French, Italian, Spanish, Russian, Portuguese, Chinese, and Japanese. Ms. Lanigan’s novels are also available in E-books on Amazon.com and Barnes and Noble.com, Apple Store, Mobi and Kobo. Several of her titles have been chosen for The Literary Guild and Doubleday Book Clubs. Her Vietnam war-based novel, The Christmas Star, won the Gold Medal Award Top Pick from Romantic Times Magazine and has also won Book of the Year Romance Gold Award from ForeWord Magazine as well as Book of the Year Romance from Reader’s Preference.

Lanigan is the author of a trilogy of non- fiction books regarding angelic intervention in human life: Angel Watch, Divine Nudges and Angel Tales published by HCI and Cedar Fort.

Lanigan was tasked by the NotMYkid Foundation to write a non-fiction book addressing teen addictions. Ms. Lanigan’s first Young Adult adventure novel, The Adventures of Lillie and Zane: The Golden Flute, was published by Cedar Fort.

Currently, she has published six novels in the Shores of Indian Lake series for Harlequin Heartwarming: Love Shadows, Heart’s Desire, A Fine Year for Love, Katia’s Promise and Fear of Falling. Sophie’s Path pubs July, 2016. She has recently contracted for three more in the series: Danger Zone, Wedding for Isabelle and A Bride for Mica.

As a cancer survivor, Ms. Lanigan is a frequent speaker at literary functions and book conventions as well as inspiring audiences with her real stories of angelic intervention from her Angel Tales series of books. She is an outspoken advocate for domestic violence and abuse and was honored by The National Domestic Violence Hotline in Washington, D.C. (THE EVOLVING WOMAN). She has been a guest on numerous radio programs including “Coast to Coast” and on television interview and talk show programs as well as blogs, podcasts and online radio interview programs.